It’s the end of parking as we know it, and I feel fine…

We have an egregious amount of parking in the United States. A lot of that parking can be blamed on planning blunders of the past. But it is also fundamentally tied to the fact that we own our cars and we own a lot of them. Many have predicted, however, that driverless cars will change that by virtually eliminating the need for parking. So, how much parking do we have today and how might that picture change with driverless cars?

As of 2015, the Bureau of Transportation Statistics estimates that there are over 250 million registered light vehicles (car, light trucks and motorcycles) in the United States. While estimates of parking totals have varied, most studies conclude that we have between 4 and 8 parking spaces per vehicles in this country. Perhaps that number isn’t terribly surprising. After all, we park our cars at home, at work, at church, at the shopping mall, etc. But combined, that means we have between 1 billion and 2 billion parking spaces in America alone.

Billions of parking spaces is a lot, but it can be tough to wrap your head around that number. So, if we were to build 1 billion parking spaces side by side, it would cover an area equivalent to the size of Connecticut.  If you want a more practical example of the impacts of parking, just find an aerial of your nearest city. With few exceptions, huge swaths have been dedicated to surface parking. In an unfortunate number of cases, area dedicated to parking exceeds the area dedicated to the buildings that parking serves.

So why won’t we need parking with driverless cars?

The main reason is that we may not own driverless cars. Instead,we’ll use them like taxis. In this scenario, when a car is done taking you from home to work, it moves on to its next trip. It spends no time parked at your house or your office. These fleet vehicles move from trip to trip until they aren’t needed, at which point they might travel to a parking garage until they are needed again. Now, rather than needing 4 to 8 spaces per car, we may only need one, just like a bus. In other words, rather than 1 to 2 billion parking spaces, we would only need 250 million based on today’s car volume.

Which brings me to my next point, we won’t need nearly as many cars as we have today with driverless cars. In a typical day, a car is parked 95% of the time. But taxis see far higher utilization. They move from one trip to the next. This means fewer cars will be needed to meet existing transportation needs. A study by a team at the University of Texas at Austin estimated that 1 shared autonomous vehicle could replace 9 conventional cars based on an analysis of existing travel patterns. Another study found that one shared autonomous vehicle could replace as many as 12 conventional vehicles without impacting travel. Assuming we still need 1 space per car, we would need between 20 and 27 million parking spaces. That is a 97% reduction in parking from what we have today. 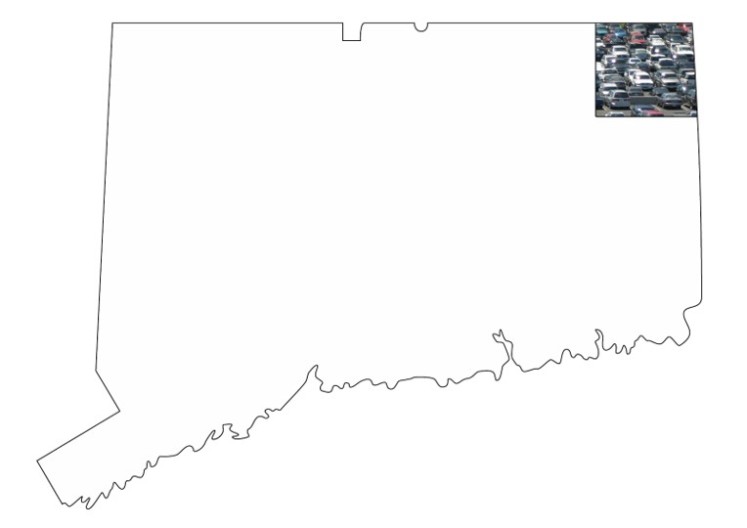 Amazingly, the story doesn’t stop there. There are plenty of reasons to believe we will change our driving habits with shared autonomous vehicles. The line in red shows an approximation of how and when travel occurs today. It is concentrated during the morning and evening rush-hours. Importantly, we really only need enough vehicles to satisfy peak travel demand. The Austin study suggests we would need roughly 27 million vehicles to achieve that. However, if decongestion and VMT pricing is employed to replace the eroding gas tax (as many have recommended) economic theory suggests this travel curve would flatten. Even if governments don’t establish a decongestion pricing scheme, private providers may. Uber already employs surge pricing to balance demand. People that can adjust their travel patterns would in order to avoid the higher fees associated with rush hour travel. Others might opt to take fewer and shorter trips to reduce their transportation costs. Total travel might look more like the line in orange. Once again, fewer vehicles means fewer parking spaces.

Taking this one step further, researchers at MIT have suggested vehicles not being used for personal travel could be used for package delivery. This wouldn’t reduce peak travel, but it would increase vehicle utilization during off-peak times. The travel curve would thus look more like the line shown in green. Up to this point we have assumed that every car would need at least one parking space because there are times in a day when virtually no one is traveling. But if cars are being used for delivery in the middle of the night when roads are empty and vehicles plentiful and cheap, that would no longer be the case. In that scenario we only need enough parking to meet the need of those vehicles that aren’t being used, which is the difference between the high and low points on the green line. This could result in another significant reduction in parking. 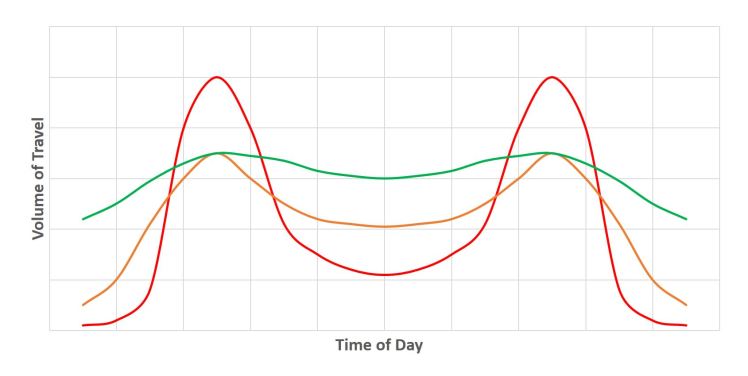 Finally, parking lots today need to be designed to not only store a car but allow two way travel and allow car occupants to get in and out of the car. But driverless car may be smaller than conventional cars and they won’t needs wide aisles for travel or wide spaces to allow people in and out. This means parking facilities can be designed far more compactly while still accommodating the same number of vehicles.

Parking is ubiquitous today, but shared autonomous vehicles have to potential to dramatically change that. The confluence of an end to ownership, changing travel habits and more efficient parking design could reduce the demand for parking to a small fraction of existing parking supply. This will largely eliminate the environmental and social consequences of parking while freeing countless acres for re-development.

UTexasAustin: Operations of a Shared Autonomous Vehicle Fleet for the Austin, Texas Market

Nelson/Nygaard: Autonomous Vehicles and the Future of Parking

Redfin: American Cities Were Built for Cars. What Will Happen When They All Leave?